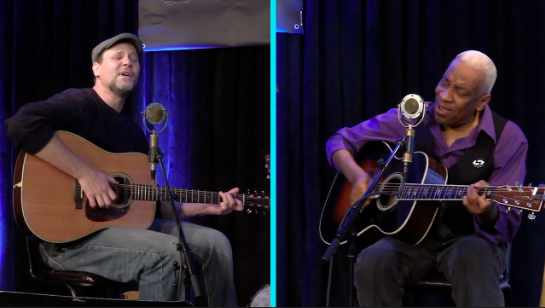 Reggie Harris is a legendary folk performer who has traveled the world for over 40 years as a songwriter, storyteller and lecturer using music and the spoken word to make an impact in education, social and racial justice, and the environment. Alastair Moock began performing in the mid ’90s and made a name for himself on the national folk and Americana circuit before turning his attention to family and educational music after the birth of his twins in 2006. He has since garnered a 2013 Grammy nomination and three Parents’ Choice Gold Medals for his family music albums. This past year, Reggie and Alastair put together a project called “Race and Song: A Musical Conversation” which explores history and current events through the lens of race. The two rely on their years’ old friendship to discuss complicated issues of race, class, gender and history with intentionality and generosity of spirit. In today’s short program for Clearwater, they’ll discuss their work together and the state of diversity, equity and inclusion in the world of folk music and beyond.