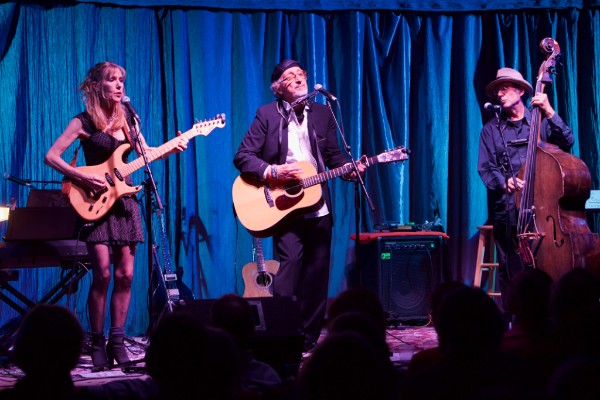 Rex Fowler carries the Aztec Two-Step legacy forward into a new era following partner Neal Shulman’s retirement. Rex and his new ensemble will perform ATS fan favorites and forgotten gems (including some of Neal’s originals), recapturing the multi-instrumental sound of the duo’s original studio recordings along with 2- and 3-part harmonies, and of course his band banter and stage patter is still as warm and engaging (and funny!) as ever.

What people are saying about ATS 2.0:
“I went to the show at The Narrows this past Saturday night. Wasn’t sure what to expect. How do you replace Neal’s guitar work? What a pleasant surprise! Rex was Rex and the band was awesome!….Don’t miss the opportunity to see them!”
“Absolutely FANTASTIC show last night. All familiar material, just taken up a notch!! Really, really terrific show! Great job Rex and company!!”

Dodie Pettit – Acoustic & Electric Guitars, Vocals
Accomplished songwriter and recording artist, Dodie Pettit first met Rex Fowler when she was a session player and singer on ATS’s 1980 “Times of Our Lives” album. Dodie and Rex were recently married and are the heart and soul of the new Aztec Two Step 2.0 ensemble. Going farther back, as part of the first generation of female rock bands of the 1960s, Dodie was a member of the famed The Untouchable, then followed up as a member of The Enchanted Forest. Dodie is a former Principal Dancer for the American Repertory Dance Company and had a distinguished 15-year career on Broadway as an original cast member of The Phantom of the Opera, as well as appearing in Tony Award winning musicals CATS and Titanic.

Peter Hohmeister – Drums, Percussion, Vocals
Rex and Dodie met Peter recently at a cabaret in Westport, CT when he was sitting in with an exquisite local jazz quartet. Being both an accomplished musician and teacher, they knew immediately that Peter’s nuanced and versatile percussive style would be a perfect fit for ATS’s diverse musical canon.