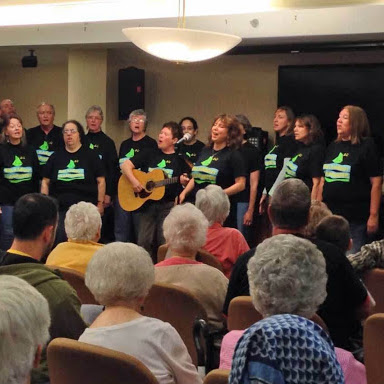 What is Walkabout? This is a question that was answered first at our founding in 1984-85 and then throughout the ensuing years of our existence. For most people, their first encounter with us is either at one of our performances – the Clearwater Revival or an Earth Day or other celebratory event – or at our Coffeehouse. But the fact is that when Pete Seeger founded Walkabout, and throughout the thirty years he was with us, he stipulated that our mission was one of social and political activism. We were to carry the message of environmental justice, peace and equality through our music – just as Pete himself had done unstintingly for three-quarters of a century.

This, then, is what makes Walkabout not just a chorus, not only a singing group (there are plenty of those), but a group that is first and foremost activist in the tradition of our founder. It is with this in mind that we have participated in marches, rallies, and street protests both large and small, local and far away. We have appeared, officially and unofficially, at events protesting nuclear arms and power, the wars in Iraq, Afghanistan, and elsewhere, in support of women’s rights, the Black Lives Matter movement, immigrant rights, the Peoples’ Climate March, and more. In addition we perform regularly in schools throughout the New York City metropolitan area.

Today, in these extremely dangerous times, when our democracy is under relentless and devastating attack, we devote ourselves to supporting the ideals of our founder: true democracy – equal rights and justice for all; a healthy, livable environment; an end to economic and political exploitation; and a world at peace. Therefore, in order to faithfully fulfill our mission and honor Pete’s legacy, it is expected that Walkabout members will participate whenever they can, not only in our stage performances, but in our activist events as well. As Pete wrote, “If only music could bring peace, I’d only be a musician.”

Learn more at their web site.