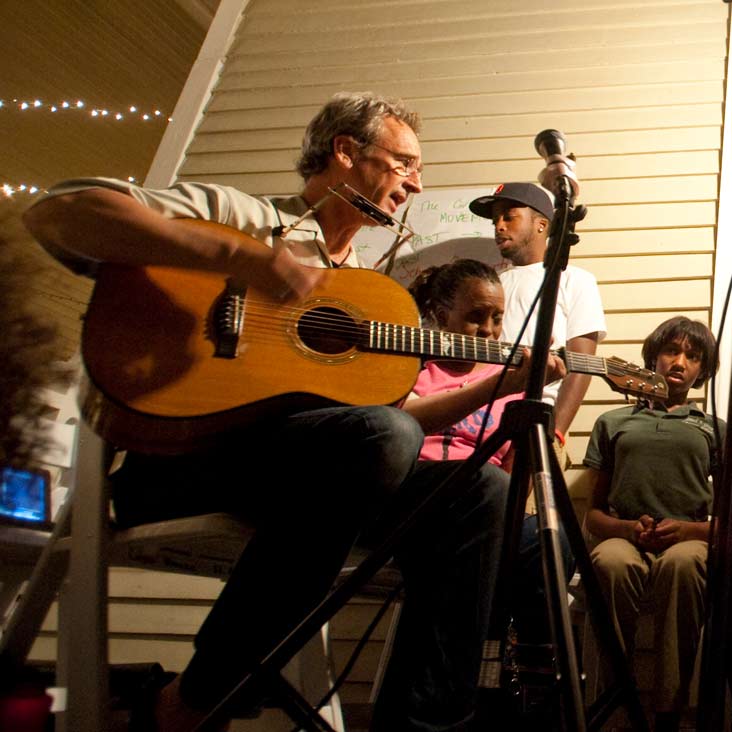 “Telling the stories of hard working people in a way that highlights the courage, deep personal experiences, and heroism found in their lives is a tradition for which Woody Guthrie is famous and which Larry Long continues.”
– DR. ANTHONY SEEGER, SMITHSONIAN FOLKWAYS

Larry Long is a singer-songwriter, spoken word poet, seeker, activist, and storyteller. Well traveled across the world, wherever he goes he celebrates people and places in song.
Like his artistic forefathers Pete Seeger and Woody Guthrie before him, Long’s sense of place and time is eloquently captured in his music and in the powerful community building he’s done with elders and children all over the country and abroad.

Author Studs Terkel called Long “a true American Troubadour.” When Pete Seeger was told that Larry is often referred to as the Pete Seeger of Minnesota, Pete replied, “I would be honored to be called the Larry Long of New York.”

Long’s work has taken him from rural Alabama to the Lakota communities in South Dakota. He has given musical voice to struggling Midwest farmers, embattled workers, and veterans. He was the troubadour for peace on Soviet/American peace cruises, sang for Mrs. Rosa Parks at the 45th anniversary of the Montgomery Bus Boycott and organized the Mississippi River Revival, a decade long campaign to cleanup the Mississippi river. He assembled the first hometown tribute to Woody Guthrie in Okemah, Oklahoma, which today has evolved into the annual Woody Guthrie Folk Festival.

Larry has sung at major concerts and festivals throughout the United States and world, including Awesome Africa Festival (South Africa), Smithsonian Folklife Festival on the National Mall (Washington DC), Winnipeg Folk Festival (Canada), Hollywood Bowl with Kris Kristofferson, and at Madison Square Garden with Joan Baez and many others for Pete Seeger’s 90th Birthday Celebration.

Long’s work in schools and communities sparked the creation of a non-profit organization, Community Celebration of Place, which creates intergenerational and multicultural opportunities for students to learn and grow through a program called Elders’ Wisdom, Children’s Song.

Long is a recipient of the prestigious In The Spirit of Crazy Horse Award, Bush Artists Fellowship, Pope John XXIII Award, Leadership In Neighborhood Fellowship (St. Paul Companies), and Sustainability Award for his work in forgotten communities.