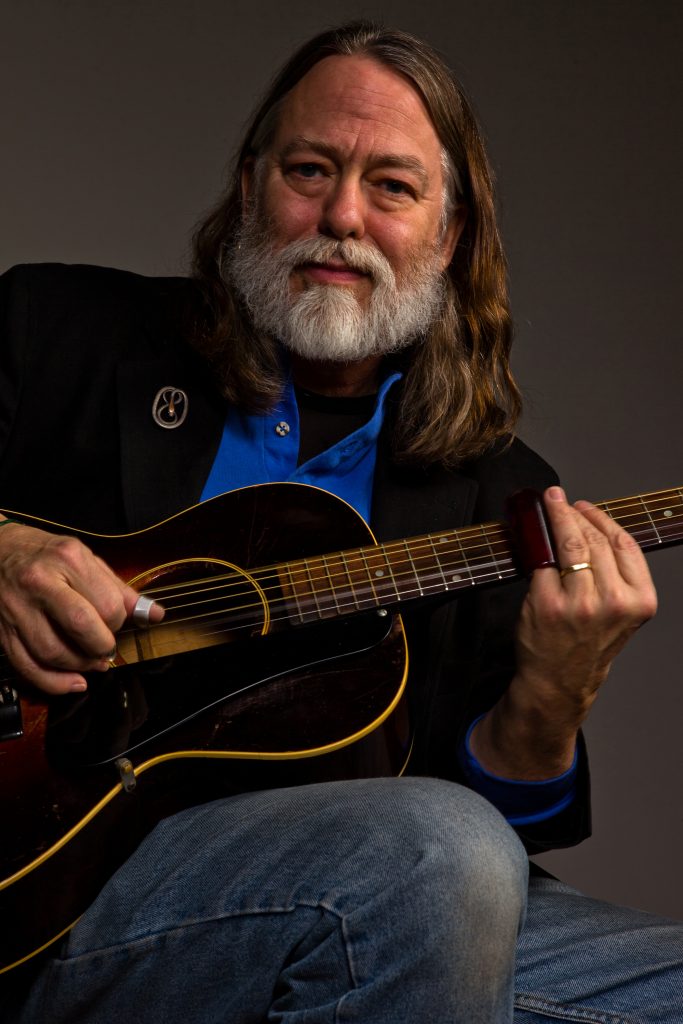 Scott Ainslie’s mother found him at the family piano picking out melodies from the records she listened to during the day when he was three years old. He’s been a musician all his life.

A Phi Beta Kappa and honors graduate of Washington & Lee University, Ainslie came of age during the Civil Rights era, and cultivated a powerful affinity for cross-cultural exchange. He has studied with elder musicians on both sides of the color line – in the Old-Time Southern Appalachian fiddle and banjo traditions, as well as Black Gospel and Blues. He plays this music with affection, authority, and power.

Armed with a variety of instruments – vintage guitars, a fretless gourd banjo, a one-string, homemade diddley bow (aka cigar box guitar) and carefully chosen historical personal anecdotes of his encounters with senior musicians across the South – Ainslie brings the history, roots music, and sounds of America alive.

On stage, in educational teaching concerts, workshops, and school residencies, Ainslie explores the African and European roots of American music and culture. His easy, conversational way with audiences and cross-disciplinary approach to the music consistently garners rave reviews from presenters, audiences, students, and teachers, alike. He is a masterful and thoughtful historian, storyteller, and musician.

Ainslie has six solo CDs to his name and maintains an active recording, performing, and teaching schedule that carries him around the country, to Canada, and to Europe.

His most recent recording is an award-winning collection of songs played on a 1934 Gibson archtop, “The Last Shot Got Him.” The CD has received strong reviews from listeners and critics, alike, and among other honors, was chosen as the Album of the Year (a Tammie Award from the Times-Argus, Montpelier, VT).

Ainslie has received numerous awards and grants for his work documenting and presenting traditional music. He has been a Public Fellow at UNC-Chapel Hill, and received grants from the National Endowment for the Arts (NEA, a federal agency in Washington DC) and the Folklife Section of the North Carolina Arts Council.

A leader in both the North Carolina and the Virginia Visiting Artist Programs, Ainslie served the citizens of these states in rural community college-based residencies from 1986 through 2000.

As a traditional musician with expertise in Piedmont and Delta Blues as well as Southern Appalachian fiddle and banjo traditions, Ainslie has specialized in performing and presenting programs on the European and African roots of American music and culture in community and educational settings.

His performances present a wonderful palette of sounds and stories that will delight the ear, awaken the mind, and satisfy the heart.